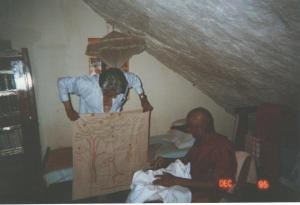 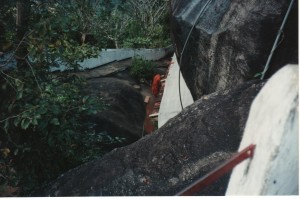 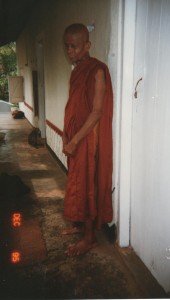 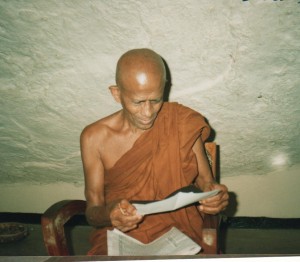 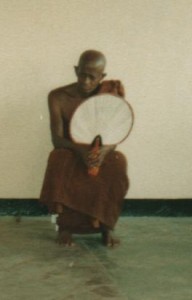 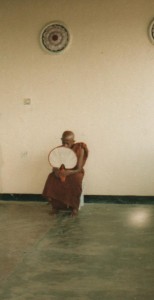 The BEP Buddhist Embroidery Project was started by attendees of the London Buddhist Vihara (Monastery) in 1994. The BEP decided to teach embroidery to people who had not learnt it in childhood. The late Venerable Apparakke Jinaratana, a Theravada Buddhist Bhikkhu (monk), who lived in a cave in Sri Lanka, near a very poor village, was using very old newspapers (supplied by villagers) as tablecloths. The BEP decided to embroider tablecloths, wall hangings and sitting cloths for his use. Although items are given to one monk they actually belong to the whole of the Bhikkhu Sangha (Order of Buddhist Monks) according to the Vinaya (Buddhist Monastic Discipline). In Asian villages, washing is done in streams and waterfalls, and hung to dry in the hot sun, so items do not last as long as they do in the west.

Anne Wynn-Wilson the late founder of the Quaker Tapestry made the wonderful suggestion that a Buddhist Embroidery project would be beneficial. The BEP Buddhist Embroidery Project was started by attendees of the London Buddhist Vihara (Monastery) in 1994. Anne Wynn-Wilson commented in 1994, “Sharing the making of such a gift enriches both the giver and receiver.” Materials were donated by Buddhists and Quakers after requests for donations were made in The Friend: The Quaker Weekly, The Devon Vihara [Buddhist Monastery] Newsletter, and The Middle Way: Journal of The Buddhist Society.

A photograph of the monk receiving the embroideries appeared in The Friend: The Quaker Weekly on 28 June 1996, and the August 1996 issue of The Middle Way: Journal of The Buddhist Society.